Alive Step Up Behind the scenes

Alive Step Up Behind the scenes

Posted By Frle / 3D animation, Behind the Scenes / making of, production, promo, set / No Comments

From the basic concept to the story and then to the production shoot. The idea was to make a one-minute promo for sport event called “Alive Step UP” where the contestants run to the top of the building – the tallest one in Slovenia.

The pre-production started early in April 2014, and the biggest challenge was how to plot and shoot adrenaline rushed action video in just two days, with limited resources and budget. Thankfully the team were enthusiasts enough, to make the impossible.

On the first day of shooting, we first had a short meeting and short after that, begun with interior shots at the lobby of Kristalna Palača. After that, we moved to the building stairs and finally called a day at the roof top. Arial shots were the first thing to start with at the next day. Thankfully the weather for flying-camera-drone was just right, but not long after, the rain started to fall. We took a break, looking at the sky and hoping for a mirracle. Around 2 PM, the sky finally cleared so we begun with the final shots on the street. 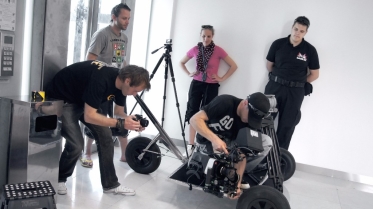 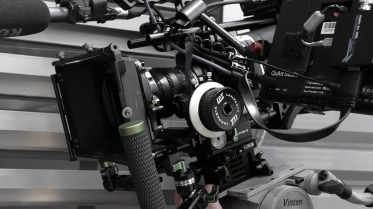 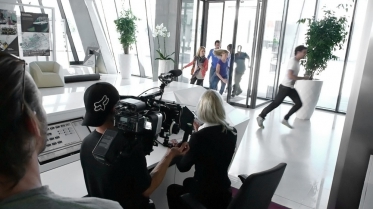 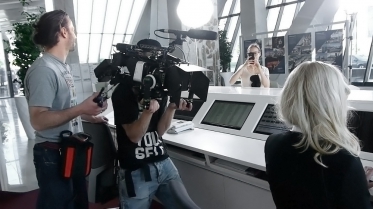 Although the production was hard (we even broke one of our Blackmagic cameras), with a great deal of efforts and with detailed scheduling we successfully conclude what we planned to shoot. At the end of the exhausting day… we all slept like little babies :)

Thanks to the storyboard we did in the pre-production, the edit was pretty straightforward. The biggest challenge was how to match music with edited cuts and Vise-Versa. Because we used stock music instead of custom one, there wasn’t much room for corrections. The editing and compositing were done using Adobe package, Autodesk 3ds Max for 3D animations, and Davinci Resolve for grading. VFX for promo was done in Autodesk 3ds Max

We all fall in love with this project… after all, we all enjoyed it and had a great time. A special thanks goes to everyone who participated in this project, especially Divino, for a great catering our empty stomachs, and SkySystem for aerial shots!

And Here a some of the B-rolls. Enjoy!

Behind the scenes – Part 1

Behind the scenes – Part 2

Behind the scenes – Part 3

Behind the scenes – Part 4