Petrol & NZS – Behind the Scenes

Petrol & NZS – Behind the Scenes

Posted By Frle / Behind the Scenes / No Comments

Petrol Energy commercial is the first promotional video featuring the biggest stars of Slovenian football team. This emotionally packed video was a unique project for both, the production and for actors themselves. Coordination between the team, standbys, children, the film crew and all those who participated in the project requiring extensive control. The organization of the sets was a huge challenge, because it required precise measured shooting time and demanded extended pre-production, as football players were available for only a limited time to us as they had to be prepared for the qualification for EURO18.

The commercial was filmed on the premises of the National Football Centre at Brdo. The filming team spent one day preparing the three shooting locations – Locker room, the corridor and the exit. Because of the tight schedule, scenes lights, filming equipment and shooting plan had to be set and ready before the arrival of national football players. Filming the first day was set entirely in the dressing room, where we wanted to capture the team spirit, their motivation, state-of-mind and their focus before the game.

For most of the guys, this was the first time as film actors, but the attitude and execution were excellent. 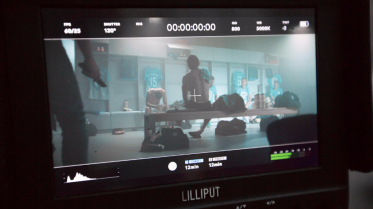 The second day of shooting took place in the corridor and exit onto the stadium. On this day, another 11 children joined the set. Many of them had a chance to have a first-class experience and hang a few hours with the best Slovenian football players.

In the story, we wanted to emphasize the Energy. The key was to highlight a little girl, which put a hand to soccer player before the game. Together with her spirit and her warmth, this gives him power and energy to win the game. 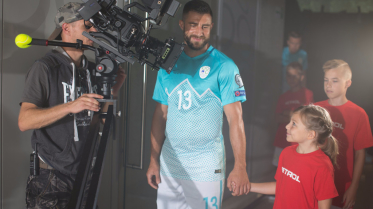 At the end of filming, we were joined by loyal fans who have staged last part of the video.

The post production took one week to complete. For the color grading process we used Davinci Resolve and mastered all in 4K resolution. We choose Klemen Bunderla as voice over narrator, as he was the perfect voice for the job. Alan Evol Ai carefully crafted every single note, and made the whole music tune emotionally-epic.

The whole project would be impossible to complete without Petrol, NZS, the dedicated football team, the creative team, and all standbys who participated. So THANK YOU again!